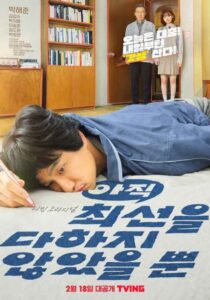 “I Haven’t Done My Best Yet” tells the story of Nam Geum Pil, a man in his 40s who lives with his father and daughter. Suddenly, he decides to quit his job and do nothing, which leads him to face criticism from his family, but he doesn’t care.

Every so often he freeloads on his best friend for free alcohol. One day, he come to know about a male neighbor who looks like an unemployed man but is actually earning lots of money. He is a webcomic creator. Then Geum Pil also decides to become a webcomic writer.

“I Haven’t Done My Best Yet” Korean drama will have a total of 16 episodes.

Where To Watch Online?

You can watch “I Haven’t Done My Best Yet” on  TVING.

*Drama is subject to regional availability.